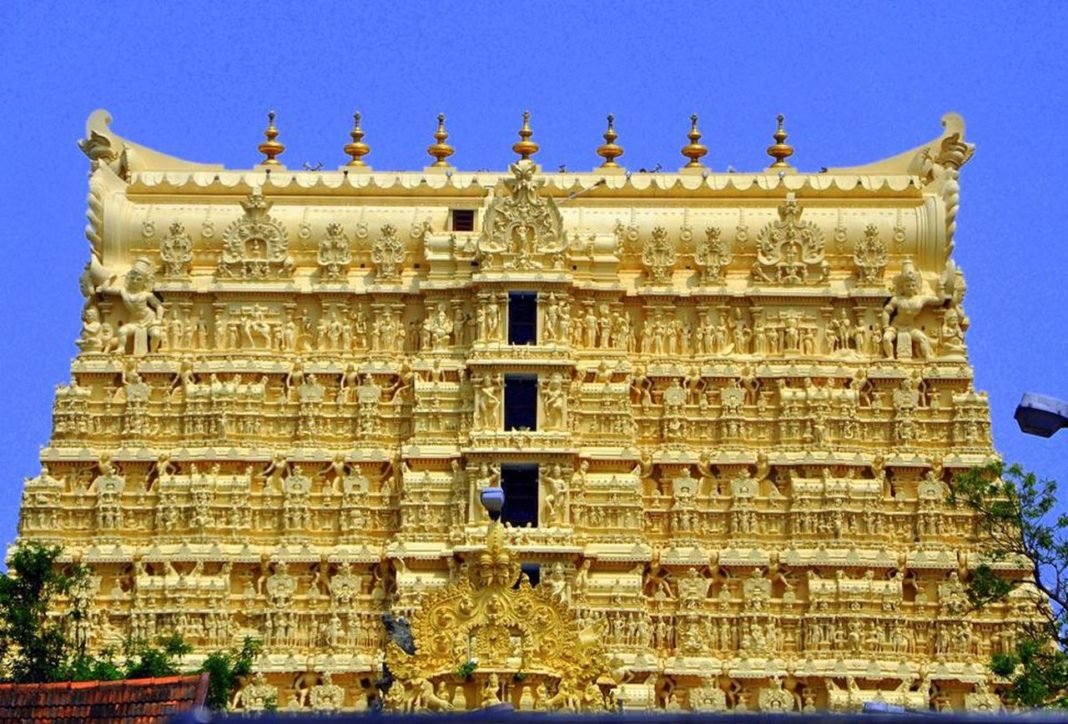 The world’s richest and sacred temple Sree Padmanabhaswamy Temple in Thiruvananthapuram, southwest coast is all filled with British colonial architecture.

The temple is being gold plated with awestruck decadence and glory. It has been the most revered temple in India. The divinity of the temple has its trace since ages.

It is the most iconic attraction of the state and one of the 108 divine Vishnu temples or Divya Desams around the world.

Why Sree Padmanabhaswamy Temple is so venerated temple?

And the last door such as the last chamber is yet to open but have till now not given permittance.

By the recent findings of the wealth in the vaults, researches have found to be riches up to 1 trillion

The rest of the vaults are at least opened eight times in a year, expect of the main vault that is Vault B. This holy room is being assessed by the Trust members and other learned Astrologers of India, as a highly mysterious, sacred and unpredictably perilous to unveil it.

Padmanabhaswamy Temple VAULT B, The chamber B is considered to be Closed as a secret chamber with the ‘naga bandham’ or ‘naga pasam’ ‘mantras’. The mantras were chanted by ‘sidda purashas’ who lived during the reign of king marthandavarma in the 16th century.

The question has been on the verge that who can open that vault B?

It is said that a door of such a secret vault can be opened by a highly revered ‘sadhu’ or ‘mantrikas’ who are familiar with the knowledge of extricating ‘naga bandham’ or ‘naga pasam’ by chanting a ‘garuda mantra’; so except in this way, the door can’t be opened by any means by anyone.

It is said that if these mantras are chanted properly by some Sadhu, only then will the door open. Else, mighty serpents guarding the door will demolish all those who try to unlock the door.

In the 1930s, when a gang of temple invaders tried to withdraw the belongings of Vault B, they failed in their evil mission as a result of the immense and noxious snakes that came in their way out of nowhere.

According to the India Times, an audit conducted into the assets of the famed Sree Padmanabhaswamy temple in Kerala’s Thiruvananthapuram has shown that a massive amount of gold from its repositories has mysteriously disappeared.

As per the reports in 2017, “the historic Shree Padmanabhaswamy Temple of Thiruvananthapuram has claimed to the supreme court that eight diamonds adorning the forehead of an idol at the temple, which was a part of the temple treasure, have been reported as missing. … It said that as per reports, the missing stones and ornaments were valued at Rs 21.7 lakhs.”

As per a detailed report by Vinod Rai and union leader R Chandrakutty, many things have been stolen including centuries-old precious assets.

There has been a legal battle raging between a royal family and government over the temple wealth. Travancore family consider themselves as the guardians of the temple and the owner of the wealth.

The government is seeking control of the treasure which the royal family is refusing.

The treasure has some spiritual and historical value that needs to be restored and that is why the government’s proposal to melt down the gold is being a controversial issue.

The sree Padmanabhaswamy temple holds a great significance and has built up with profound divine force.