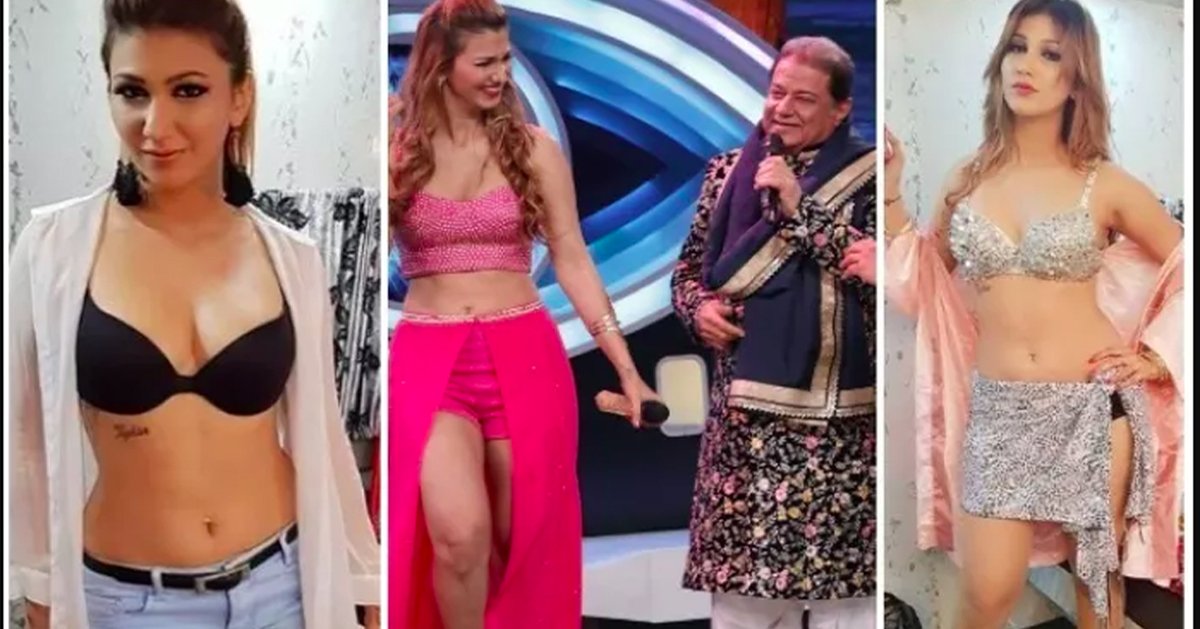 Who says only rock & pop stars are the real dudes?

This is the first time, may be, people have started realizing the side-effects of Bhajans and Kirtans. Thanks to Anup Jalota and his bhakts Jalota has become a good example for all of us atheists round here. My granny used to tell me Bhajans and Kirtans give a blissful life. Well, seeing Anoop jalota dancing with hot Jasleen made me believe how !

Bhajan Samrat Anoop Jalota confessed his three years relationship with dancer and singer Jasleen Matharu on the sets of Salman Khan’s reality show Bigg Boss last night. It left everyone stupified Including Salman and the senior judges too. This vichitra “ Guru- Shishya” jodi wants to explore their relationship inside Bigg Boss’s house.

Soon after the revelation of his relationship the internet took a storm and all we wanted to know  was about Anoop Jalota’s eye candy Jasleen Matharu.

Jasleen who is 37 years younger to Jalota is a singer, actor, performer and a well trained Bharatnatyam, Salsa, and Belly dancer. Her solo debut film “ Love De LOVE DE” is released and has been doing really well which was directed  by none other but her father Kesar Matharu. This Anoop Jalota’s 4th love has been trained in kickboxing too. Jasleen has performed with various renowned actors including Sukhwinder Singh, Mika Singh, and Papon. Her father Kesar Matharu is a film maker and he had also cast Jasleen in his film “ The Dirty Relation”. Jasleen has a brown belt in kickboxing.

At the launch of the show Jasleen confessed to have fallen in love with Jalota while taking her music training under him and ex[pressed that age is just a number when your souls are connected.  These love birds are now inside the Bigg Boss house and are ready to explore the new dimensions of love.

Well, this is not the first time when Jalota has been in the top stories. Earlier he created a buzz by marrying Sonali seth ( current wife of Roop Singh Rathod ) without the consent of his family. The marriage obviously didn’t last long and Jalota moved on to marry Bina Bhatia but fate took his toll and their relationship too couldn’t made it to eternity. Anoop’s third relationship was the talk of the town for a while reason being his wife Medha Gujral who was shekhar Kapoor’s first wife and I.K Gujral’s niece. The couple have a son named Aryamaan. Unfortunately Medha passed away due to the liver failure in 2004 leaving Anoop in isolation.

As of now Anoop has been 4th times lucky in love with his gorgeous girlfriend Jasleen who even happened to be once his “SISHYA”. The couple revealed their 3 years relationship at the launch of  Bigg Boss 12th season. While Anup has all the praises for his love Jasleen, she considers herself lucky to have Anoop in his life and ready to have his back and be by his side through all the odds and ends of Bigg BOSS journey. During the launch when Jasleen was asked what if she finds someone else attractive in the house? Jasleen had a very straight answer “ This won’t happen”.  Many acquisitions have been put on their relationship in and out of BIgg Boss house but the couple is ready to face come what may. The age difference and the magnanimous personality of Jasleen has been the talk of the town since the launch of Bigg Boss 12.

Truly, God’s delays are not denials. My faith has been restored in God. It’s never too late.  So, Start your bhajans kirtans right away and you never know you to might get lucky in love one more time !

Previous articleDrive 80Km @ Rs.10 – Everything You Need To Know About India’s Telsa : Ather 450
Next articleAs per Scholars These Are The Real Reasons We Still Haven’t Met Aliens